“You will not see a more emotionally-engaging Batman movie than ‘LEGENDS OF THE KNIGHT’ in your entire life.”
– Filmmaker Kevin Smith

Today’s post comes from long time iPlayerHD user and friend, Brett Culp. Brett is an award-winning digital filmmaker and speaker. His most recent film, “WE are BATMAN: Legends of the Knight” has been seen in dozens of venues across North America. Read more about Brett at the end of his post.

If you are a filmmaker, you are constantly expressing dreams.

No matter what type of client you are working for, you are communicating a dream. In wedding films, you convey a bride and groom’s dream of love and a family’s dream of hope. In a corporate film, you give voice to a business owner or president’s dream for the organization. I have spent my career doing this.

In early 2012, I was considering how often I had used my skills to cinematically express the dreams of other people during my 15 year career. I realized in that moment how rarely I was expressing MY OWN DREAMS! It made me frustrated and excited and angry and motivated all at the same time. I vowed that I would no longer allow busy schedules and life stresses to steal my personal storytelling dreams. Rather than constantly reacting to the pressures of my business, I would become proactive. I became committed to controlling my destiny as a cinematic storyteller.

I scheduled some specific, extended time to THINK about my dreams. Over a period of weeks, I realized I had a specific story I wanted to tell. And it deserved a feature-length documentary. I had NO Hollywood connections. I had NO wealthy partners. I had NO experience with funding or distribution.

But I had a dream that would not leave me alone. 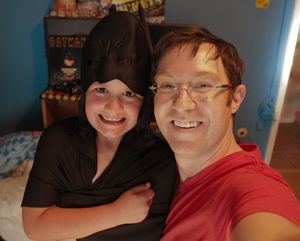 I had an idea for a documentary film that truly inspired me. I found myself thinking about it while I was brushing my teeth. When I was supposed to be working, I was thinking about this film. And several conversations with my wife were ruined when I realized that I hadn’t heard the last 2-minutes of what she was saying. (This was NOT good!) To keep the idea from dominating internal self, I needed to give it some room to breathe in the outside world. I started making notes about how I would accomplish it. I searched through my music library for songs that would embody the tone of the film. I searched Google for more information, more insights, more inspiration. My Kindle became filled with free sample chapters from authors who I might interview. With every step, the dream became more real. It was clear that the film in my head could be made. And I knew I was the one who was supposed to make it.

I spent 3 months developing the idea. No filming, just concept development. Instead of watching the newest addictive TV show, playing video games, or watching sports, I visioneered a movie. My client’s dreams got my daytime hours. MY dream got my evenings. I created a 2-page document that outlined the idea. I began circulating it to the people I wanted to be involved in the project. I named the film Legends of the Knight. It would tell the true stories of people who had been inspired to become real-life heroes because of their childhood love of Batman. Yes… Batman. (Check out the website at: www.WEareBATMAN.com )

In April 2012, we launched a successful crowd funding campaign to get the project rolling. I communicated a clear vision of what I wanted to do, how I would do it, and how the finished film might look. Raising the funds to make my dream a reality became a part-time job during the campaign, but I felt very blessed to connect with many like-minded people who contributed. The energy spent during the campaign also created awareness for the film that continued to build throughout the year. Throughout the spring, summer, and fall of 2012, we scheduled and filmed shoots all over the country while balancing our regular clients. It was difficult, but rewarding.

In February 2013, we launched a 3-minute Trailer for Legends of the Knight and a 2nd funding campaign on Kickstarter to finish the film. The result was overwhelming! We reached our goal of $32,000 in 48 hours, and the final total kept rising over the next 28 days of the campaign. We were covered by USA Today, The Hollywood Reporter, First Showings, and many top news outlets. (Check it out here: http://kck.st/W4yO4a ). As we used this momentum to finish the film, I realized that the dream that I had clung so tightly to over many, many months wasn’t actually MINE. It was gift that had been given to me. And I realized that I had the responsibility to do something with it that would bless the world.

So, when the film was complete, our first distribution decision was a give-back. We created a partnership that allows anyone in the U.S. to request a screening of Legends of the Knight in their local theater. And our company’s proceeds from that screening are contributed to the charity of their choice. (Learn more by watching this video: https://iplayerhd.com/player/legends).

As I write this, we’ve had theatrical screenings in 75 cities, benefiting children’s hospitals, wish foundations, homeless ministries, Cub Scout troops, Boys & Girls Clubs, and organizations that support orphans, distressed families, medical research, and many more. The dream that I was given has become a blessing to people around the country.

This is by far the most difficult and ambitious thing I have ever done. It has challenged my skill as a filmmaker and a producer. It has expanded my ability to be creative with my art and my management solutions. It has pushed me to learn new skills. It has been the source of my highest highs and my lowest lows. I have shouted with joy and felt like punching walls. It has been the most extreme experience of my life. And I have been living with nervous energy since the day our first funding campaign in April 2012. I highly recommend it to you.

Perhaps your dream is to make a film. Or maybe your dream is totally different. Whatever it is, the world will not be complete until you release it. Until you let it out and give it some room to breathe. My dream is currently alive and growing. Like a child, you never know exactly what it’s going to be until it is fully grown. And our journey to share the film with the world isn’t yet completed.

One of the greatest gifts we can give is supporting each other’s dreams. In this moment, please hear me say this to you: Your dream is good. The world needs it. You can make it real. Don’t finish the journey with your dream still inside you.

Brett Culp is an award-winning digital filmmaker & speaker. He produces inspirational documentary films and works with organizations and individuals to capture the beauty of their stories. His distinctive approach to filmmaking has attracted a client list that includes Tyler Perry, the Backstreet Boys, Def Jam Recordings, best-selling author Tom Clancy, pro athletes Marshall Faulk and Johnny Damon, and Fortune 500 companies.

Brett’s work has been featured in USA Today, The Hollywood Reporter, NBC, CBS, Lifetime, Food Network, and WEtv. He appeared as a celebrity expert on Entertainment Tonight and in USWeekly. The newest edition of the college textbook “Documentary Storytelling” devotes an entire chapter to Brett’s unique, organic production style, which focuses on authentic storytelling.

Brett recently created the not-for-profit organization called The Rising Heroes Project, which will create uplifting and educational films designed to inspire personal growth, community service, and positive engagement in viewers of all ages.

Learn more about his film Legends of the Knight at: www.WEareBATMAN.com